How Important is Social Media Marketing For Small Businesses?

A recurring question that both business owners and even online marketers have is “how important is social media marketing?” The thought is: it’s hard to get people on my facebook page, google+ page, or twitter feed. I can’t think of anything to make a youtube video about. Even I think my facebook feed is boring, so I know my customers are bored. Do I really need to put any emphasis on social networking?

The question certainly seems fair. After all, when was the last time you got a client off of facebook?  If you’re like most professionals, the answer is “never.” But does that mean that social media marketing is a waste of time, or does it mean we’re not using it right?

For the answer, I use two pieces of evidence. First, a personal anecdote, take it or leave it. Second, some hard evidence from Experian, who figured out how people spend their time online.

In my time as an owner of an insurance agency, and doing marketing for insurance agents I gave social media marketing a shot several times. I tried facebook ads, I created facebook pages, google+ pages, and twitter accounts. I tried contests that required “liking” or “sharing” a post.

I spoke with Davey Stevenson, who was the social media director for Overstock.com and zagg skins. He taught me how to have effective contests and social media events. With his help I was able to generate a fairly respectable social media following. He also warned me that it wasn’t an “instant results” kind of marketing. I spent time each week making sure I was updating people when a client “saved money” or when there was some sort of *ahem* “thrilling” insurance news. After about a year I had gained several hundred likes for my little insurance company.

After a while I figured it was a waste and let my social media presence just sit and languish. The grand experiment was over.

Then things got weird.

After a few months had gone by I started getting messages. About once per month a facebook “friend” would message me with “is your company still doing insurance?” or “can you give me a quote?”

While we didn’t get an overwhelming flood of clients from facebook, we did get some business come in. Certainly enough to justify the fairly minor effort of updating the company status once in awhile. We just hadn’t understood the time frame of social media. We had treated social media like a sales promotion instead of the branding effort it really is. We wanted to see instant results from people – clients jumping up and saying “Yes, I am looking for a quote right now!” when we should have been looking to have people say “Wow, my insurance is expensive. Isn’t there some guy on facebook who does that? He seemed professional and approachable. I’ll ask him.”

So, the first thing to understand about social media marketing is that it isn’t sales, it’s brand development. Just like seeing huge billboards of the big personal injury law firm in town is going to keep them at the top-of-mind for people driving on the freeway, seeing frequent updates from your facebook page is going to keep you at the top-of-mind for people on social media.

The question is: are people using social media very often?

Experian recently surveyed English speakers across the globe about how they used their time on their personal computers. They took all this time and translated it into an hour. Here are the results. 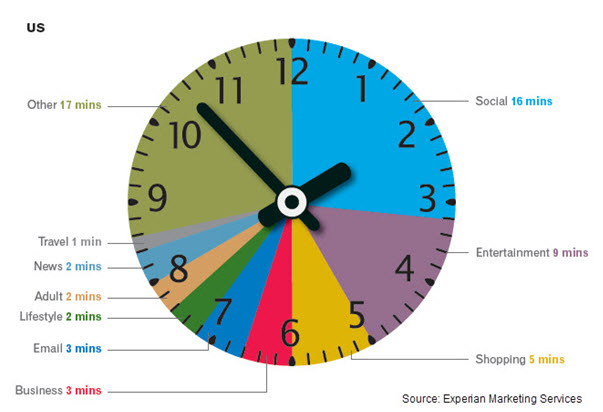 So if you were to take all the time a person spends on their computer and called it an hour, over 1/4 of that time is spent on social media – more than any other single activity.

The number is also remarkably large when considered in terms of mobile devices instead of computers (15%).

Think about how much time you and your family spends on computers and using mobile devices. A huge chunk of that is used for social media. Having a social media presence isn’t just like putting an expensive billboard up on the freeway, getting a passing glance. It’s like being invited into people’s homes, cars, and offices. When people choose to “like” you or “+1” or “follow” you, they aren’t just glancing at your photo during the commute – they are committing to hear everything you have to say, as often as you say it.